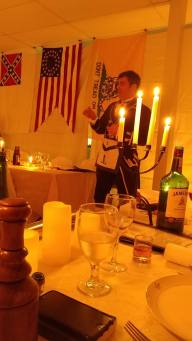 The Colonial Table Lodge is an annual event for the brothers of Fidelity-St. John’s Lodge #3 and was recently held on Saturday, February 25th. This event invited brothers from other lodges to come together to celebrate the history of the United States of America. Aside from the delicious food, candlelight atmosphere, great conversations, and countless toasts, the event would not have been complete without the keynote address by W.B. James Wade D’Acosta.

W.B. James Wade D’Acosta presented the brothers of the evening with flags and historical artifacts that played a significant part of our history. Much of the presentation was with audience participation. The brothers were divided into six groups in which they were asked to associate six different artifacts with flags displayed in groups of three, five, and seven around the banquet hall. Some of the artifacts includes the 1895 Silver Dollar, Pieces of Eight Coin, an Obsidian Rock, and several old dollar and two dollar bills. Moreover, some of the flags that were displayed were the current American, British, Mexican, and Spanish flags. There were also the Betsy Ross designed 13 colonies flag, Gadsden Flag, and other version of American flags throughout the American history.

Much of the evening’s discussion revolves around the historical relationship between the United States, Spain, and Great Britain. For instance, one of the artifacts that was passed around was the Pieces of Eight Coin, which played an important role in the monetary system for all three nations. The Pieces of Eight is a coin used in the American colonies during the eighteenth century. Colonial North American commerce was conducted with foreign coins for several reasons. First, there were no gold or silver mines in British North America. Second, Great Britain itself had limited sources of precious metals. Coins came from the major gold and silver producing regions and the great trading nations. The most commonly used coins were from Spanish territories. Many of these coins reached America through trade with Mexico and other nations’ colonies in the Caribbean. Prevailing mercantile theory and the resulting laws attempted to steer the flow of precious metals and coins into Great Britain, rather than the colonies. Hence, coins were very valuable and, in some portions of the British North American colonies, rare.

Furthermore, during the colonial American history, our trade and monetary system were bound by British rules. As a result, American colonists used coins from many different nations; one being Mexico’s pesos. During this period of time, the value of the coin was never determined by it’s face value, but rather, by the weight of the coin itself in gold and silver.

The W.B. D’Acosta also touched upon the symbolism of the flags displayed. For instance, for most of us, we already know the representation and symbolism of the stars and stripes of our American flag, but we never really thought about the significance of the colors Red, White, and Blue. As thus explained, “White signifies purity and innocence, Red, bravery & valor, and Blue signifies, vigilance, perseverance and justice.” Aside for the United States, many other countries uses these three combinations of colors such as Great Britain, France, Australia, and Russia just to name a few. 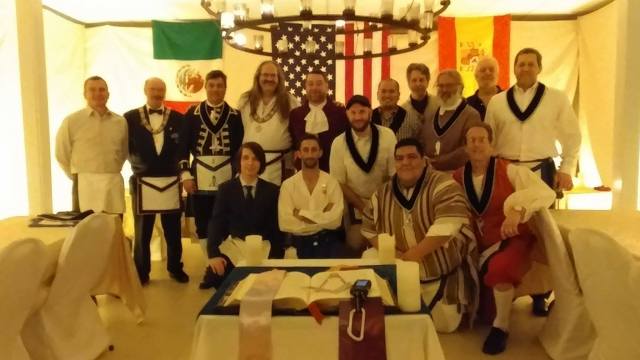 Moreover, another flag that most brothers found interesting was the Mexican flag. Most would have believed that Mexico would adapt a flag with the same resemblance as Spain, which colonized Mexico for many years until Mexico’s war of independence in 1910. Bro. Diego Aguillon who has deep roots with Mexico explained the “the emblem of the Mexican flag is a Mexican Royal Eagle devouring a serpent on top of a cactus.” According the Aztec legends, once they find an eagle devouring a serpent, they will settle and create their empire. Mexico adopted this image as their emblem to pay homage to their native roots and separate themselves from the Spaniard Empire and ties from Europe.

The rest of W.B. James D’Acosta’s presentation reminded the brothers of the fraternal unity and unbroken values through the trials of the American Revolution, Civil War, as well as in Mexico’s fight for independence from Spain and the Mexican Revolution of 1910. The sacred retreat of friendship and virtue which is our life in lodge may be tested by outside events but must never be sacrificed to passions in the profane world.

We Are Located At: